I arrived safely in Denver early Christmas morning, after a few delays and minor obstacles.

The last update you received from me was regarding the rape victim who was in the hospital with the stab wounds.  Her condition plummeted and she ended up on life support for a few days.  In the end, she lost her battle to stay alive.  As you may recall, her perpetrator had escaped police custody.  He was recaptured, and within that same hour, the little girl let go of her struggle to stay alive and quietly passed on. 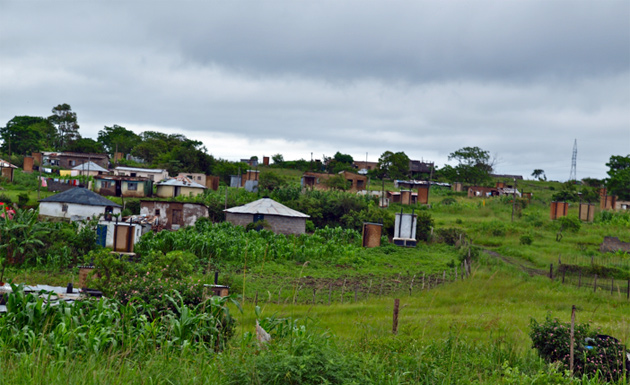 Honoring Nunu
We were all devastated.  Her case did gain the (generally absent) media attention.  Her death came during the “16 Days of Activism”, an annual event that focuses on women and children’s rights.  “Nunu” has now become the face of 16 Days of Activism and her story became national news.  Because of the media attention, the Department of Ministry, Department of Social Welfare, and other dignitaries seized the moment to speak about the problem of rapes against women and children.  In addition, the government paid for the funeral of little Nunu. 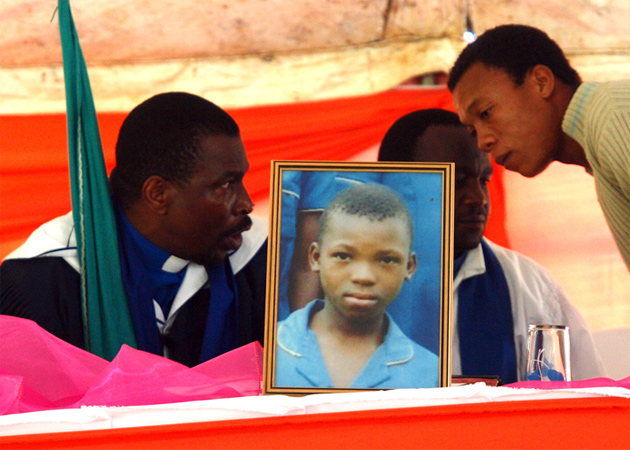 Zulu culture is rich in tradition and there is strict protocol to follow for such occasions.  The funeral was last Sunday under an enormous white tent in the middle of the impoverished rural area where her family lived.  Hundreds of people attended, including the police officers who I worked with on the case.  The crowd sang and prayed, the dignitaries spoke, and those of us from the crisis center shared stories.  After 4 hours, the funeral process was finished. 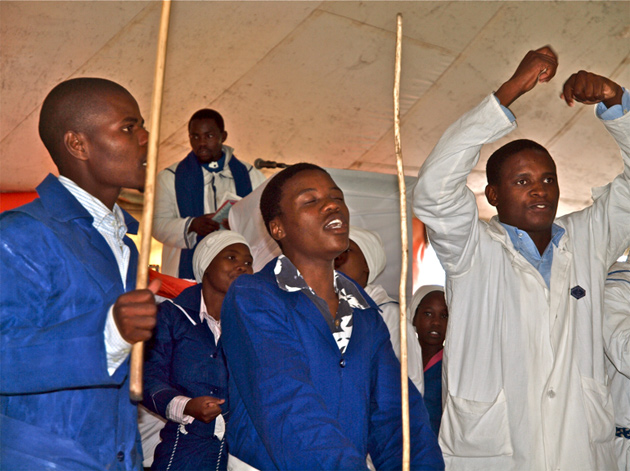 We said our goodbyes and left.  All the TV stations were there, in addition to newspapers.  I am horrified that this child died at the hands of a serial rapist.  Her memory is bringing more awareness and public outcry about crimes against children. 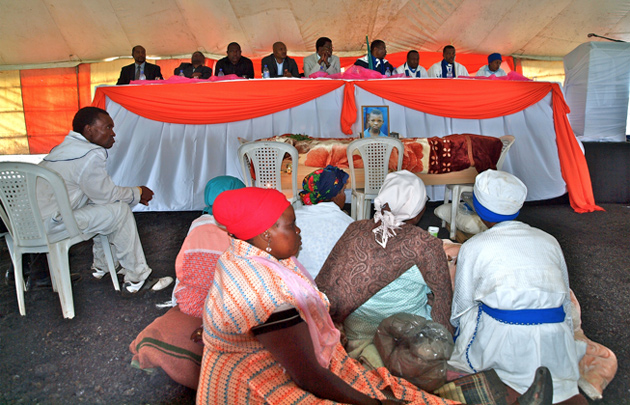 She was so strong and brave to stay alive long enough to give details of her perpetrator so that he could finally be stopped from hurting more than he already had.  The police have been trying to solve several of his rape cases for over a year.

The Court Appearance
The perpetrator’s court appearance was the following day, where he filed for bail application.  We organized a demonstration outside of the courthouse.  People from Nunu’s rural area, The Red Cross, African National Congress, teachers, and others joined us to protest. 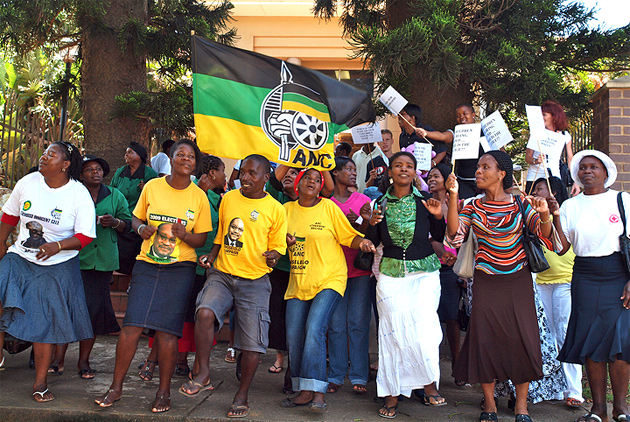 We packed the courtroom and hallways to attend his hearing.  This was the man that, during the police chase, ran by me with such speed that I felt a breeze.  He was brought up from his cell underneath the courtroom, and all we could hear in that moment were the heavy shackles that made it difficult for him to climb the stairs.  When his head became visible to the crowd, there was a collective gasp and muffled sounds of outrage.  The perpetrator looked with shock out into the crowd.  I don’t believe he had any idea that there would be such an outcry over his actions.  From the look on his face, I thought maybe he realized for the first time that his life was forever changed.  He had hurt so many women and children in the past and had never been caught.  He appeared on 4 additional counts of rape, 1 murder charge, and 1 attempted rape.  The police believe he is linked to many more, including unsolved murder cases.  The judge denied bail and the courtroom rose up cheering.  That was the first step toward justice in this case and the moment in which I needed to release the outcome.  I was leaving the country in only a few days, and I had invested so much in this; it was difficult to walk away.

It Never Ends
On Monday after court, I returned to town where the police picked me up to make a positive ID of yet another incident.  I was in a pub with a staff member to toast my departure.  It was my final weekend in South Africa and we’d made plans to go out and hear some music.  One of my friends went in the back room to play pool, while the other went on stage to sing.  It was then that I noticed a man standing about 2 feet in front of me.  He struck me as someone that didn’t fit into the crowd.  It was such a happy evening and people were dancing, laughing, and smiling, and this particular man stood solemnly at the edges.  Suddenly, without provocation or warning, this man took a gun out of his pocket, and shot another man directly in front of him in the face at close range.  As the man who was shot dropped to the ground, I climbed off the barstool behind him and slid around a sliding glass door to my immediate right, which led to an outdoor balcony.  I was the only one on the balcony and stood silently in the corner.  I could hear pandemonium and screams inside the bar.  The gunman then walked out onto the balcony where I was standing and aimed his gun directly at my face.  I stood still and looked him in the eyes.  Somehow, I knew I was protected.  I felt it.  Some voice from within assured me, “You are not going to die and if he shoots, it won’t hurt that bad.”  I know this sounds crazy, but this confidence supported me to stay calm and steady.

The police later told me this is probably why he didn’t shoot.  If I had screamed or begged him not to shoot, it might have escalated the situation.  The man and I stood there looking at one another, and then he very slowly lowered his gun, turned around, and walked out of the bar.  Once I knew the gunman was gone, I walked back into the pub and went to the man that had been shot, now lying in a river of blood.  Everyone was frozen and screaming.  I knelt down by his side and checked for a pulse, of which there was none.  I shouted for someone to call the ambulance, and my friend and myself began CPR.  Soon another man stepped forward and took over chest compressions; they worked for at least 25 minutes.  Slowly, his color began to return and after 45 minutes, an ambulance arrived.  He’s alive!  The man is still in ICU but will be OK in time.  The bullet miraculously missed his brain and is lodged behind his ear.  His face was shattered and the damage to his eyesight is still undetermined.  He will be hospitalized for a very long time and the reconstructive surgery on his face will be extensive. 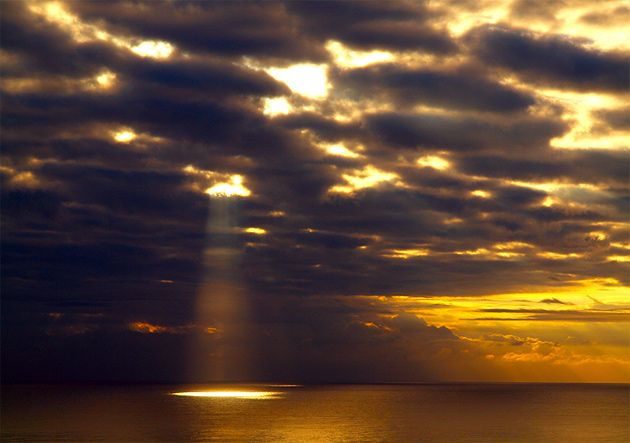 This was the sunrise the morning after the shooting.  It was such a sign of hope for me.

The story was in the newspapers by daybreak.  I made the positive ID of the shooter on that Monday afternoon.  Immediately after, he broke down and confessed to the shooting.  This was a club of all white people; the shooter was also white and apparently had a long history of unbearable depression.  He snapped that night and his victim was totally random.  They’d had no argument or previous contact and no one in the pub had ever seen the shooter before.  The police told me I was lucky because I could have been shot or taken hostage.

There are different laws for white people.  Under no circumstances will this case fall through the cracks, and it will get the attention it deserves. This is the way the law should work; my only wish is that crimes committed against the black people would receive the same justice and attention.

Home
I am sitting now in front of a lit Christmas tree at a house in the mountains, where it is lightly snowing outside.  A family that loves and treats me as one of their own surrounds me.  I am blessed beyond measure.  I am not fully present.  I have a great deal to process in the next few days and weeks.  I feel like I am between two worlds.  Part of me is still in South Africa where I had finally adapted, and now my sleep deprived body is sitting in the United States, where I must now acclimate to a different reality.

I am so grateful for this journey.  I have learned so much about myself and others.  We are so carefully connected and interwoven in a big tapestry of beautiful colors.  When one string unravels or is broken, it affects the big picture.  We have a duty to help mend the broken and frayed threads because at the end of the day, we’re all in this together.  It’s our piece of work.

Now that I’m back stateside, I know I can’t stop here. There is a lot of work to be done: supporting others to believe in themselves, and to protect and stand up for their rights as human beings.  Maybe I am here to point out other people’s worth when they are falsely made to believe they have none.  I don’t know yet.  But I do know that what I have given to others has been returned to me tenfold.  It is I who has received more than I dreamed possible.  I went with the intention of serving others and in the end, I received so much more than I gave.

My prayer is that through my journal notes, I have shared a thought or experience that inspired you to see things differently, to love more deeply, to become aware of your prejudices and to work through them, and to be grateful for the little things that leave a large impact.

Giving Thanks
When I left Durban, it was a cloudy day.  I sat in a window seat on the plane and watched as we lifted off the runway.  Above the cloud cover, I saw the bright blue sky and the approximate location of where I’d spent my time for six months.  I then saw the most magnificent rainbow.  It wasn’t just any rainbow; it was an enormous block of radiant color that reflected prisms all over the white fluffy clouds.  I was awestruck.  Tears overflowed onto my face and I knew that rainbow was symbolic of all the love I had received.  It was “Grace”.  The colors shifted and colored the clouds and I looked around at other passengers, wondering if they were seeing the same thing.  It doesn’t matter.  I saw it and I knew I was part of something so much bigger.  It was a gift of such magnitude, and that scene will never leave my memory.  I stared out the window and gave thanks.  I am so very grateful for all of you and the love you have shared.  I have felt your prayers, encouragement and support.  I have been given gifts that I never anticipated receiving.  There was no possible way I could have foreseen what this journey held, but I trusted I would be led and protected – and indeed I was.

Thank you for being with me, with all of my heart.  I did not do this alone and I couldn’t have done it without the help of all of you.  I am who I am because of those around me.

I am humble and grateful.
Signing off on a snowy Colorado morning. Amen!
Love, Patty